Home » Blog » A Brief History of The White Wedding 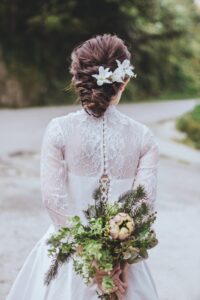 Every year the brilliant summer joins us at French’s Point, I’m struck again by how gorgeous a white bridal gown can look in a ceremony against the backdrop of the blue bay. Though some brides opt for ivory or other more funky colors, most of the time, white still wins. In fact, white is so common as to be expected, even when it seems so much of the rest of the wedding traditions are easily tweaked, so it’s kind of ironic that this tradition is one of the ceremony’s newest.

The white wedding started with Britain’s Queen Victoria, who wore an all-white lace gown for her wedding to Prince Albert in 1840. News spread of this stunning fashion decision, bold because most brides prior to that time wore black or other somber-colored gowns. White was considered a strange choice because it could easily be stained and, since laundry was a time-consuming and not always successful activity back then, an expensive white dress could easily be ruined by any kind of work or spill. But it was this brazen show of excess that made it so appealing to the wealthy elite in Europe, who over the ensuing decades adopted the white wedding tradition to show off the money they had to throw around.

By the end of the 19th century, the “keeping up with the Joneses” impulse made white dresses a status symbol for most elite brides in Europe and the States. But white weddings became the universal norm for everyone else only during the boom times after World War II when brides took the show of excess even a step further by buying a dress that they expected to wear only once. That spin on the tradition would have been too frivolous even for Queen Victoria – she reportedly had her gown tailored for re-use.