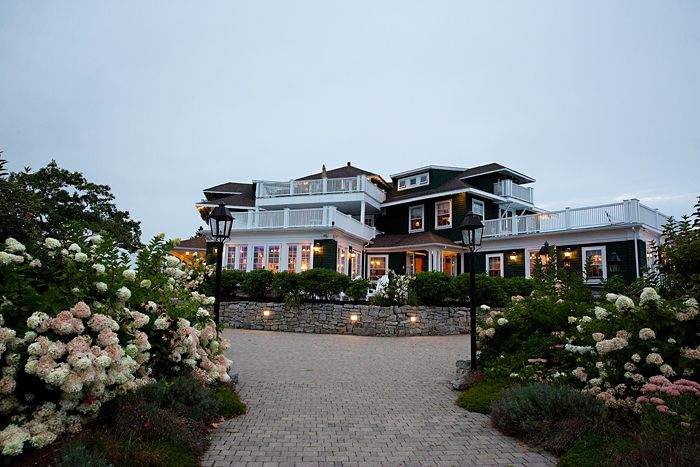 Hailing from Australia (her) and a variety of countries including England (him), this couple has a lot of character.  Now living in New York City, this international duo planned their beautiful coastal Maine wedding “from away”, often conferencing in with us on the phone. Edward has a great sense of humor and kept us laughing throughout the entire planning process. They knew exactly what they did and did not want as part of their special day, making our job that much easier! Their decor scheme was very romantic, featuring beautiful pink peonies (the bride’s favorite!), and garden roses. The dining room was romantic and warm with touches of silver and lavender against a white backdrop.

As for their ceremony, the couple wanted what Edward referred to as something “quick and dirty”, which was evidenced by their cheeky programs shown below (music starts, we get married, everyone parties!). In a beautiful moment prior the ceremony, the double doors of French’s Point opened to the bride and her father standing to hear Ashleigh’s sisters perform a song by the gazebo.

The festivities continued late into the night when the group headed to a local downtown Belfast bar. There they took over the bar’s signature “community seating” area, ordered late-night food and enjoyed the atmosphere. Guests were then provided transportation back to their accommodations.

Everyone had a wonderful time, and we are so excited to share the evidence in photos with you below. Thank you to Hailey Tash Photography for the photography, and the rest of the vendors listed below for all their amazing hard work!