Home » BLOG & NEWS » A Brief History of the Wedding Ring

A Brief History of the Wedding Ring 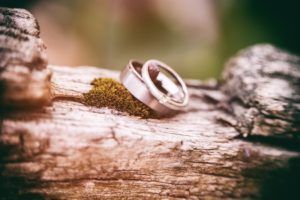 The exchange of wedding bands is today often central to the ceremony, but did you know that it was only during the 20th century that the custom of putting a ring on the groom became popular?

The wedding ring has a long and interesting history as the symbol of everlasting love (and, historically, ownership). Putting a band on the fourth finger of the right or left hand is practiced all over the world, dating back to the ancient Egyptians, who believed the circle symbolized eternity and made their rings out of hemp, grass, or reeds. In ancient Rome, the ring was made of iron, a coarse and rust-prone symbol of ownership, and was a part of a series of betrothal gifts intended to prove to the bride’s family that the groom was serious about the union. Among many Eastern Orthodox and Eastern Catholic Christians, the ring is still given before the ceremony to the bride by the priest or the best man.

In 17th century England and France, the ring became less a symbol of ownership and more a testament to love and mutual devotion. Rings during this time were made of silver and intricately engraved with love poems.

The double-ring ceremony we practice today is the product of an American jewelry industry marketing campaign begun in the late 19th century. The industry was dogged in its advertisements encouraging a ring for not only the bride but also the groom, but the idea didn’t catch on until after World War II, when the booming economy allowed for such excess. By the late 1940s, around 80% of marriages were double-ring, compared with 15% before the Great Depression, and today the double-ring is the norm.

Hemp or iron, gold or silver, the ring certainly has proven to be one of the most lasting and visible testaments to the world’s long wedding tradition.