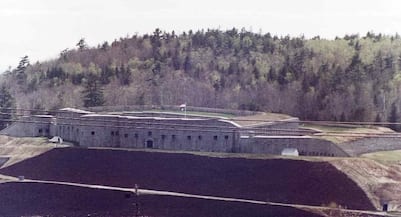 On the western bank of the Penobscot River, the granite edifice of Fort Knox has stood for more than 150 years. It remains one of the best-preserved fortifications along New England’s miles of coastline.

Located in Prospect, Maine, the fort is named after Major General Henry Knox, also the namesake of Kentucky’s well-known Fort Knox Army post. The general was the country’s first secretary of war and retired to Thomaston, Maine in the late 1700s.

Soldiers manned the fort during both the Civil War and the Spanish-American War, but it ultimately never saw battle. Construction began in 1844 when hostilities between the United States and Britain over the Canadian border erupted. The British had invaded and occupied the Penobscot River Valley twice before, and the fort was established to protect the river and nearby Bangor, Maine, a major shipbuilding hub, against another potential naval attack.

Fort Knox garrisoned its first troops from 1863 to 1866. Mostly recruits in training, the soldiers included members of the 20th Maine, a Civil War unit of the U.S. Army famed for its defense of Little Round Top at the Battle of Gettysburg and for its heroic leader, Maine native Col. Joshua Chamberlain.

Made from granite quarried upriver, the fort was never fully finished according to plan due to a lack of funding. In 1923, the federal government put Fort Knox’s 125-acre campus up for sale, and it was bought by the state of Maine. The fort later was designated a National Historic Landmark, and restoration projects include repairs to the Battery A powder magazine and refurbishment of four defense howitzers.

Today, the fort itself is open to visitors from May to the end of December, while the grounds remain open year-round.