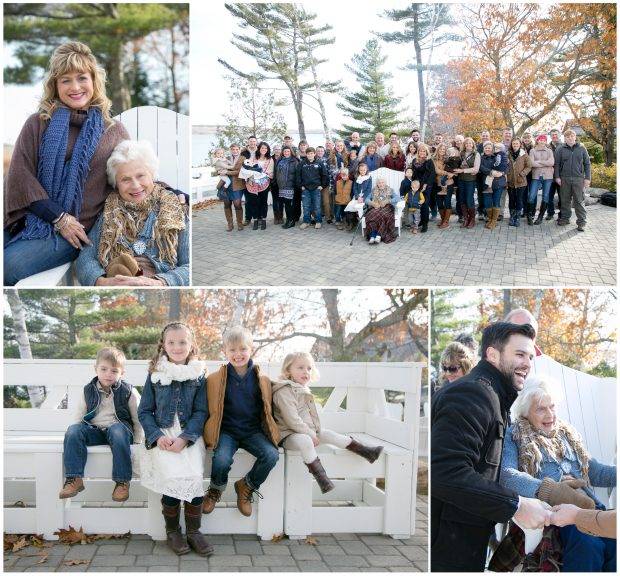 When you visit French’s Point, you will pass a little cottage just before Beach Rose Farm. You may see a pretty older woman wearing a wide brim hat and a beautiful smile sitting on her bench. Likely, she will give you a friendly little wave as you pass. This sweetheart is my maternal grandmother, Bernadette Tilton Douglas, my Grand Mama. She has come to be a big part of the French’s Point story and is the heart of our family.

Bernadette was born on January 3, 1927, just a couple of years before the Great Depression hit the United States. She grew up in a small town in Central Maine. She was the next to youngest of 10 children born to my great grandmother, a school teacher and laborer in a woolen mill, and my great grandfather, a lumberjack. She experienced a childhood filled with love, but also more than her share of challenges and tragic loss. She lost two siblings in childhood: one was hit by a car, and the other died of scarlet fever. This sickness almost claimed my grandmother’s life as well, but she was able to make a full recovery. Her father died in a work accident, as was so common in those days.

In spite of the challenges she encountered early in her life, my grandmother persevered. She studied to be a Registered Nurse as part of the Nursing Cadet program starting in Waterville, Maine and then completed her training in Baltimore, Maryland during World War II. After the war ended, she went on to work as a nurse in a hospital. She married my grandfather, Merle Smiley Tilton, a decorated Marine and war veteran, on June 28, 1946. Together, they raised six children. My mother Bonita Tilton Brooks is the oldest of the brood. After her children started leaving home, Bernadette went on to work in the maternity ward of the hospital. She was well-suited for this job because there is nothing she loves more than the wee little babies.

Grand Mama bought the little cottage at French’s Point and has been spending May through October with us each year. This has been an incredible gift to our family.

In 1982, my grandfather had a massive stroke, and my grandmother became his fulltime caregiver. He was not an easy ward. The horrors he experienced in combat tormented him. Not long after his stroke, my grandmother set off on a cross-country adventure to the west coast with my grandfather in tow. This was an immense undertaking. She continued to care for my grandfather until he passed in 1999. During her time in Idaho, my grandmother also helped care for my young cousins (three handsome, busy boys) who lived nearby. They have shared with me the immeasurable love she invested in them and the impact this had on them as children.

In 2001, after a brief courtship, she married a childhood friend and veteran, Edgar Douglas. These two enjoy their retirement years; traveling and experiencing adventures together. In July of 2012, Grand Mama bought the little cottage at French’s Point and has been spending May through October with us each year. This has been an incredible gift to our family. My four small children have enjoyed wonderful times with their great grandmother who loves them immensely. She goes home to Idaho to live with my aunt in the winter months.

This past November, almost 50 of our family members came from near and far to French’s Point for an epic, three-day family reunion over Veteran’s Day Weekend. This was such an appropriate time because so many of our family have continued my grandparent’s legacy of service to our country in the military. We celebrated Edgar, who passed away at the age of 93 after 15 years of marriage to my Grand Mama. It was a bittersweet time together that passed all too quickly as all good things do. Bernie, as her friends call her, is her happiest when she has a small baby in her arms and is surrounded by the ruckus of family. As the grandmother of 14 and the great grandmother to 14 children, I was so happy to see her heart so full of love that weekend. Those memories will stay with me for my lifetime.

Bernie’s devotion and love for her family as well as her faith in God have kept her family together, loving and respecting each other in spite of the challenges they have faced. My Grand Mama has taught us all many lessons through her example. She is loving, strong, resilient, faithful, loyal, practical, frugal, and generous beyond measure. We are blessed to call her Grand Mama.

All photos by Spring Smith Studios.