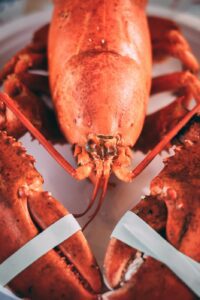 With lobster as pricey as it is, you might not know that Maine’s iconic crustacean has a surprisingly checkered past. According to the Gulf of Maine Research Institute, hundreds of years ago lobsters filled the ocean so densely they would wash up in piles on the beach. People couldn’t give them away they were so common. That’s right — lobsters back then were considered a lowly food. Native Americans used them for garden fertilizer and only the poorest early colonists ate them. Lobsters during colonial times were so unwanted, in fact, they were fed to prisoners and servants. One servant uprising in Massachusetts even included a demand that the servants not be forced to eat lobster more than three times a week.

Lobstering as an industry began in the 1820s with the emergence of “smackmen”, or middlemen who would transport by barge the lobsters caught in Maine to merchants clamoring for them in Boston and New York. Lobsters began being canned in the 1830s and Portland’s B&M (now known for its baked beans) built its reputation on canning these crustaceans and sending them around the world. By 1885, commercial lobstering accounted for nearly 130 million pounds of the consumed crustacean per year – including plenty of specimens weighing forty or more pounds – but after overfishing depleted the population to around 30 million by 1900, the fishery imposed stricter standards on the size of the catch.

Today, lobsters are so prized that “lobster gangs” have formed in Maine waters to protect lucrative fishing spots from lobstermen, not in the “gang.” One well-known gang operates on Monhegan Island, whereby state law 17 lobsterman have exclusive rights to the water immediately around the island. These guys aren’t delicate when it comes to making a living on Maine’s delicacy.

Lobster Series #1 : How to Eat a Maine Lobster